“Good things come to those who wait…….”

In October 2013 Sport Wales kindly agreed to donate a bag of sports equipment to Silo India to support their community activities.  Its an impressive bit of kit, colourful fun equipment and hundreds of resource cards designed by educational specialist to deliver engaging activities.  There was never any doubt that this was going to have a huge impact on the local community, but just as this very famous advert (click on photo) depicts below, good things come to those who wait…………. 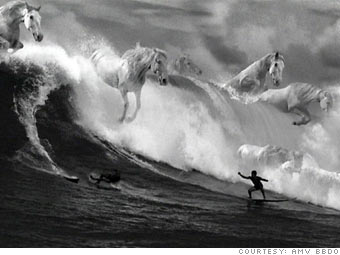 The resource cards arrived early November, then it was a case of waiting; 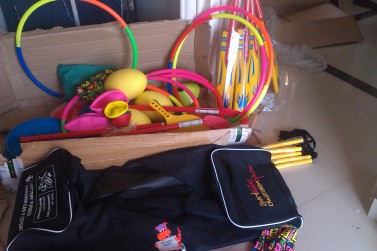 After 7 months of phone calls, emails, my passport being sent to Mumbai, a lot of money being paid for various ‘fines’ the equipment arrived! I think all of us were a little bewildered when it arrived.

7 months of waiting and it was here, but what the heck we were going to do with it?????

A trial run of the equipment with about 8 of the local kids, is what we were going to do!

These kids had never seen anything like this before, they took part in bare feet, in everyday clothes, on a small piece of concrete outside the volunteer accommodation at Silo India.  But you couldn’t fault their enthusiasm. It was supposed to be a 10 minute session which turned into a an hour and half!  We only stopped the session because it was getting dark and there was no light.

In Wales the government invests millions of pounds every year into sport, every school receives equipment, training, resources and support, community clubs can apply for grants and have numerous professional staff on hand to support them. Sadly the sporting infrastructure here is nowhere near as sophisticated.

Schools deliver PE but with increasing demands on schools to deliver academic achievement sport is just not a priority.  Its a familiar battle we have in Wales but when you consider that most schools have no facilities, no equipment, no coaches or expertise, with kids lucky to experience 40  minutes of sport a week it makes the challenges in the UK and Europe seem miniscule.

“Sport has the power to change the world…it has the power to inspire. It has the power to unite people in a way that little else does. It speaks to youth in a language they understand. Sport can create hope where once there was only despair. It is more powerful than government in breaking down racial barriers.” Nelson Mandela

It might seem a bit far fetched to say that’s what this equipment will do that here but it’ll certainly have an impact. The kids speak little English, I speak even less Tamil.  But through demonstration, gestures and sign language we managed to get the kids taking part in some really fun games. I certainly enjoyed it and at the end when the kids said ‘thank you mam’ with big smiles it certainly made me feel that the 7 months wait had been worthwhile.

With the trial run a success it was time to get ready for the official launch of the new community sports club.  Silabam classes have been going well, numbers slowly increasing every week but Silo India have big plans to set up a community sports club which will become the hub of the community.  Initially it will provide sport sessions but overtime the facility will be used to address social issues such as unemployment, womens empowerment, environmental awareness and much more.

The launch included a couple of speeches but more importantly some sports demonstrations.

The kids from Saturdays session were here and ready to go, they even got some of the equipment out and start practising between themselves.  It really made me laugh when one of the kids noticed me watching, decided to start teaching her friend what they had ‘learnt’ the day before.

So everyone in place, on time, we were ready to start.  Word had spread as over 40 local people turned up to watch.

First, a Taekwondo demonstration from a local club.  Really impressive I have to say. 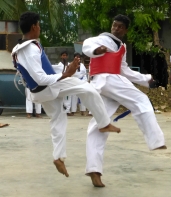 Really good to see girls taking part too, there’s no doubt that engaging girls and women in sport is going to be Silo India’s greatest challenge.  Particularly in rural areas like this where women really do have little choice and freedom to express themselves.

Then on to the Dragon Sport demonstration.  Thankfully the kids had remembered a lot of what we had done the day before so I didn’t have to do too much explaining.

The event was a real success.  Silo India now has Silabam and Taekwondo sessions running and the sports ground should be finalised in a few weeks.

Everything is slowly starting to come together here now and I can certainly see the huge potential and role that sport can play in this community.

Maybe the kids in these photo’s will become the next commonwealth athletes representing India?

7 months of frustration and we can finally look forward.

I’d like to say a huge personal thanks to Sport Wales for donating this equipment and an equally heart felt thanks to all the people that worked tirelessly to get the equipment here. I certainly won’t forget your efforts.

So just as the surfer in the advert waited for that perfect wave, so did we.

The wave has certainly arrived and its moving with some momentum.

Finally its all happening!

Being one of the most impatient people I have to admit that actually, sometimes………..

“Good things come to those that WAIT“

8 thoughts on “Good things come to those who wait……..”